COSMICS is a H2020/FET-Open project (Future and Emerging Technologies).
COSMICS intends to develop a modelling platform around molecular spintronics and general concepts for efficient strategies to greatly optimize the magneto-transport properties of materials/devices.

Researchers from the consortium have shown in a recent publication (J. Phys. Chem. Lett. 11, 9329 (2020)) that the symmetry breaking occuring when a molecule is in contact with a surface allows to control the ground state of a multiconfigurational molecule. Using scanning tunneling microscopy and ab initio calculations, they have shown that the ground state of iron tetraphenyl porphyrin molecules is different when they are adsorbed on a gold or a graphene substrate. In particular, the nature of the frontier orbitals is modified. In addition, they found that on graphene the molecules exhibit electronic properties close to their gaz phase. These findings open a promising route toward interfacial engineering in molecular electronics. 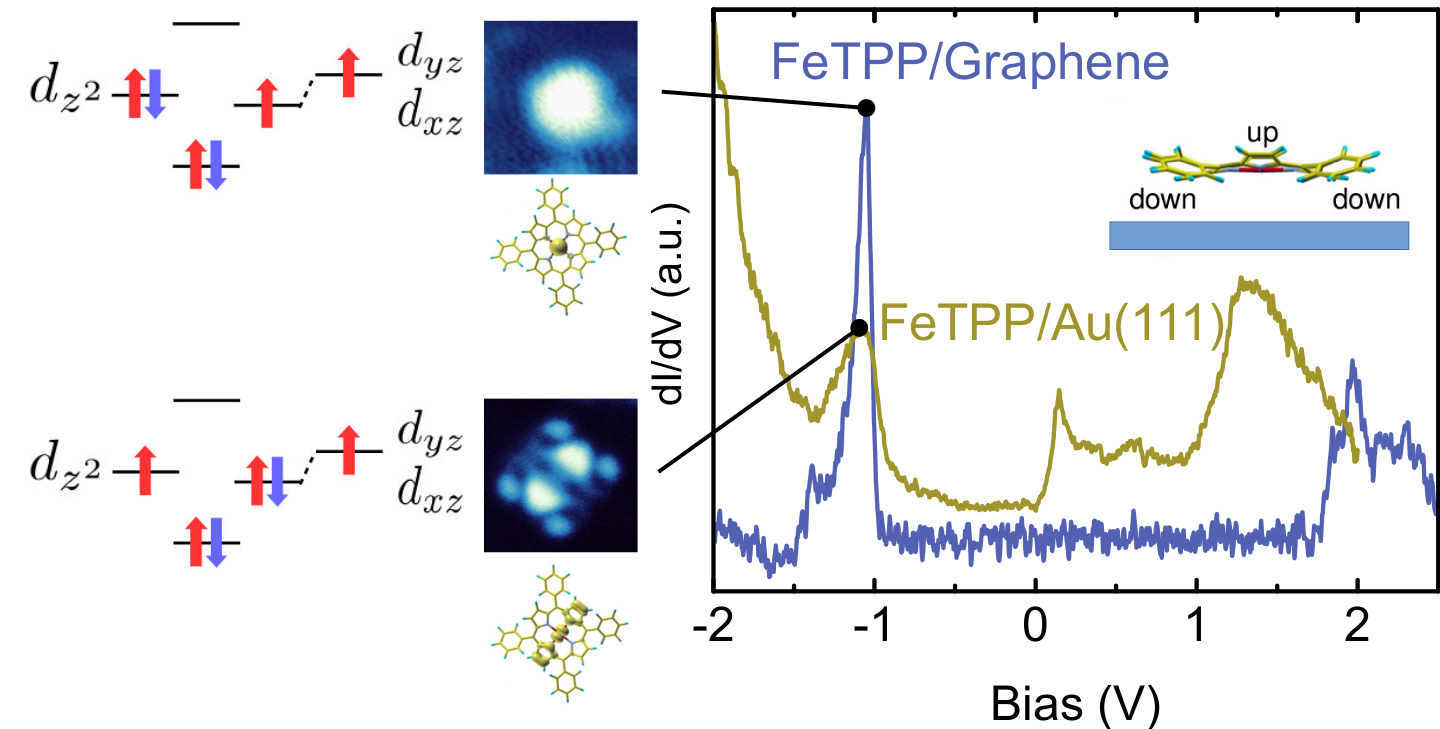 In a recent publication (ACS Appl. Mater. Interfaces, 12, 29461−29472 (2020)), researchers from the consortium have reported on the “Epitaxial Thin-Film vs Single Crystal Growth of 2D Hofmann-Type Iron(II) Materials: A Comparative Assessment of their Bi-Stable Spin Crossover Properties. Integration of the ON−OFF cooperative properties of FeII spin crossover (SCO) compounds as components of electronic and/or spintronic devices is currently an area of great interest for potential applications. This requires the selection and growth of thin films of the appropriate material onto selected substrates. In this context, two new series of cooperative SCO two-dimensional FeII coordination polymers of the Hofmann-type have been synthesized and characterized by different means. In particuler, the detailed AFM study has revealed the epitaxial growth mechanism and sheds light into its influence on the operative quality of the SCO properties of the thin-films. 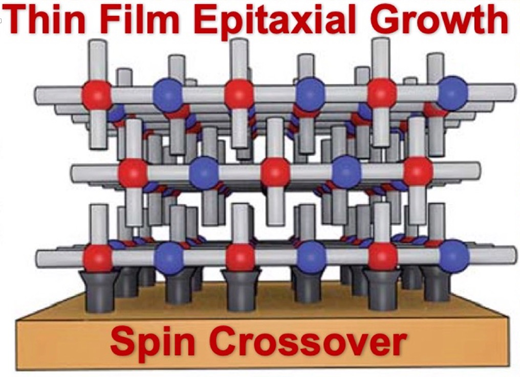 The latest version of the QuantumATK atomic-scale modeling platform is now available. It includes many new exciting features and performance improvements. 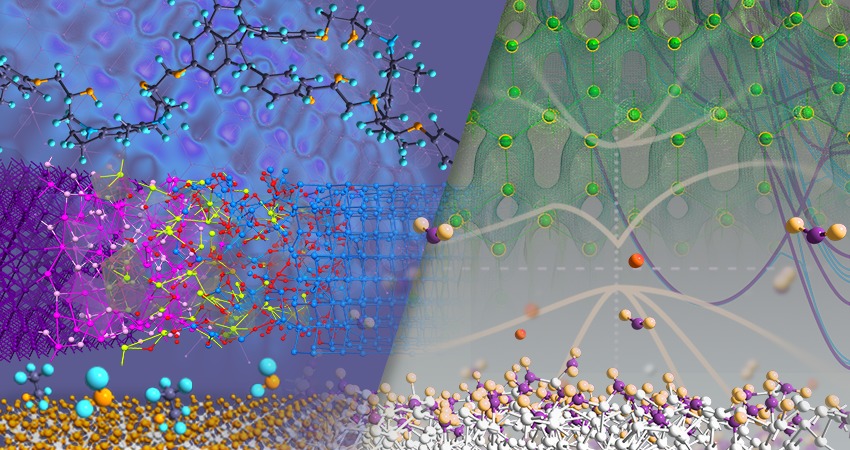 In June 2020 Christian Vedel defended his Master thesis entitled "Implementation and test of method for calculations of the DMI-vector in an industrial DFT software". This work is the fruit of a close collaboration between DTU, Synopsys and CEA teams. It also involved scientific discussion with the experimental group of André Thiaville world-wide expert in DMI at LPS (Paris Saclay). 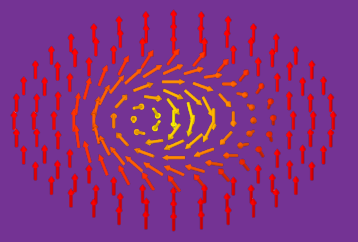 To allow all partners to continue the close scientific interaction with the other members of our consortium. We tried to compensate the lack of face to face meetings because of the COVID-19 crisis and also give an insight into the latest project results.

The orators were mainly PhD students and post-docs currently working on COSMICS or on very closed topics. It was a good opportunity to involve more the young scientists.

The talks were around 12' long  with a session of questions.

The presentation took place via the BigBlueButton platform. 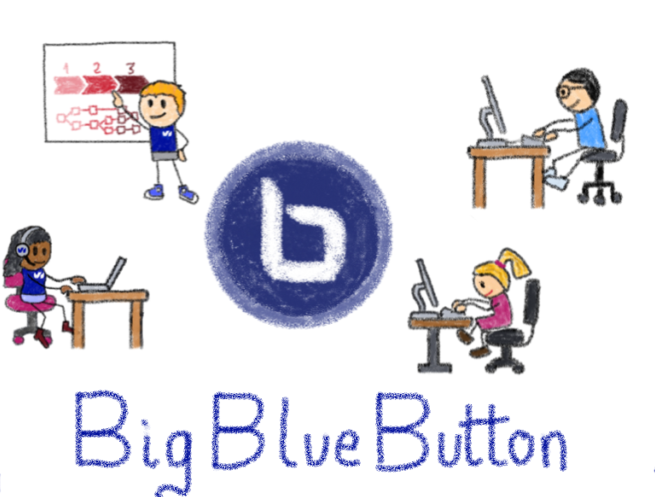 In a recent publication (Nano Letter 20, 6908 (2020)) researchers from the consortium have shown using a scanning tunneling microscope (STM) that a cobalt phthalocyanine molecule (CoPc) on a nitrogen doped graphene undergoes a charge transfer ranging from a fractional to an integer electron charge. The molecule remains generally neutral (CoPc0) when located above a single nitrogen, whereas it becomes charged (CoPc-) above a nitrogen pair.

Computing with molecules: a big step in molecular spintronics

In a recent publication (Nat. Nanotechnol. 15, 18 (2020)), researchers from the consortium have reported on the design of a new kind of molecular switch, and its switching on a Ag(111) surface. The corresponding work has a significant impact in the community and has been advertised by various press releases, cowritten by the researchers, from the Kiel University (Kiel News) and the synchrotron SOLEIL (Soleil News ), in addition to news in the journal of the Kiel University UniZeit (UniZeit News ) and the local newspaper Kieler Nachrichten." 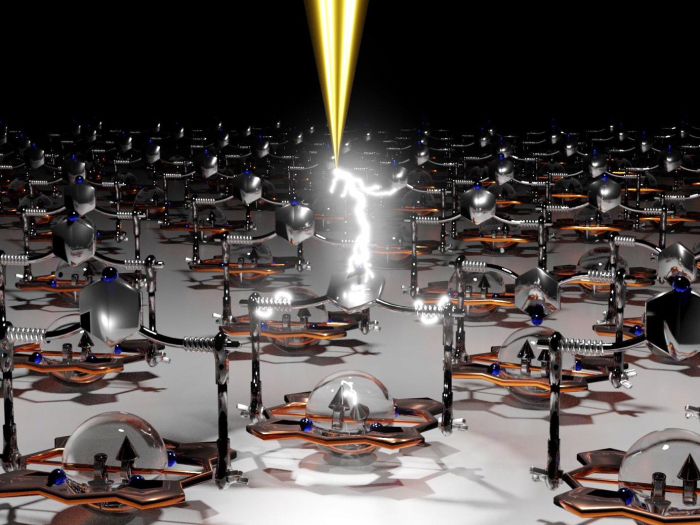 How to force the magnetic state of a bistable molecule

Spin crossover molecules have two states (a magnetic one and a non-magnetic one) that can be modified by external stimuli. The possibility of switching from one state to another with stimuli is very interesting for applications in molecular spintronics: scientists keep searching for new supports, always more miniaturized, for the information bits. But the preservation of these properties is questioned in low dimensionality. An international collaboration between researchers from French (MPQ, Paris ; SIXS beamline, SOLEIL ; ICMMO, Orsay ; SPEC, Saclay), Indian (JNCASR, Jakkur) and Romanian (Faculty of Physics, Isasi) institutions have shown that when spin crossover molecules are deposited on a gold surface, the substrate influences the crystalline organization of the molecules and the strain induced in the molecular network forces the coexistence of both magnetic and non-magnetic molecular states at low temperature (J. Phys. Chem. Lett. 10, 4103 (2019)).

Through a large collaboration between experimental and theory groups researchers from the consortium (and other groups) have shown how the interaction with the substrate can drive the magnetic state of a layer of spin-crossover molecules.

QuantumATK Team together with scientists from SPEC CEA, Universite Paris Saclay, as part of the EU COSMICS research project, published a paper on the simulation of magnetocrystalline anisotropy energy (MAE) of Fe, Co and Ni slabs (PRB 100, 174226 (2019) ). This work shows that simulations with QuantumATK can be efficiently used to investigate the parameters controlling the MAE, such as thickness and crystallographic orientations of these materials as bulk, slabs, surfaces or interfaces. As tunability of MAE is often a desired functionality of magnetic materials, modeling is an important part of the R&D workflow for designing materials with optimized magnetic properties. 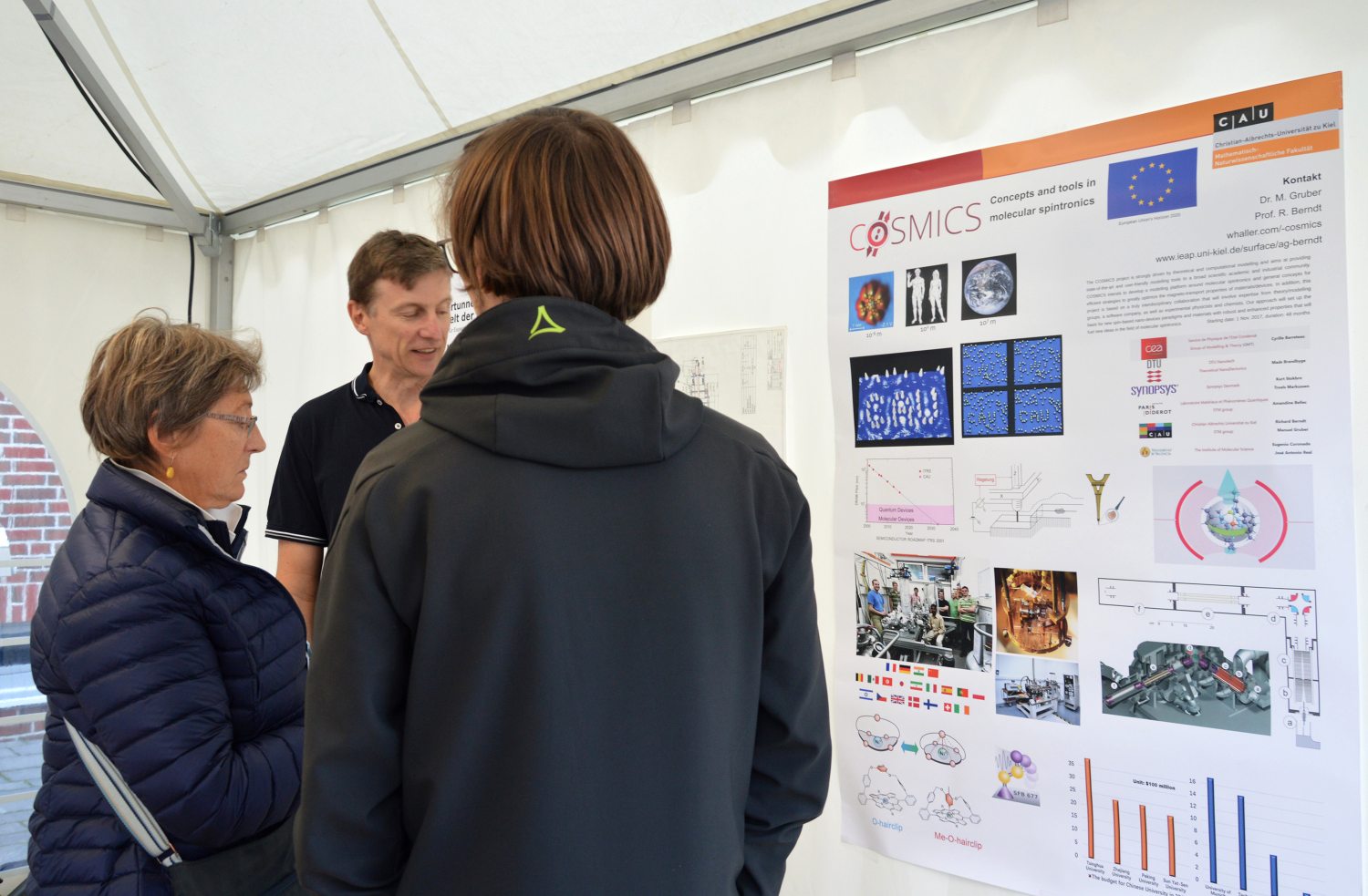 A fundamental understanding of new smart functional molecules and concepts to use them for developing new components for electronic devices – that are the main aims of the project COSMICS “New Concepts and Tools in Molecular Spintronics”. Last week the international consortium met at Kiel University for the first time. The project brings together six teams of physicists and chemists from across Europe, including universities and research organisations from France, Spain and Denmark, and Kiel University from Germany. The project is being funded through the EU's HORIZON 2020 research programme with approximately 3.8 million Euro. 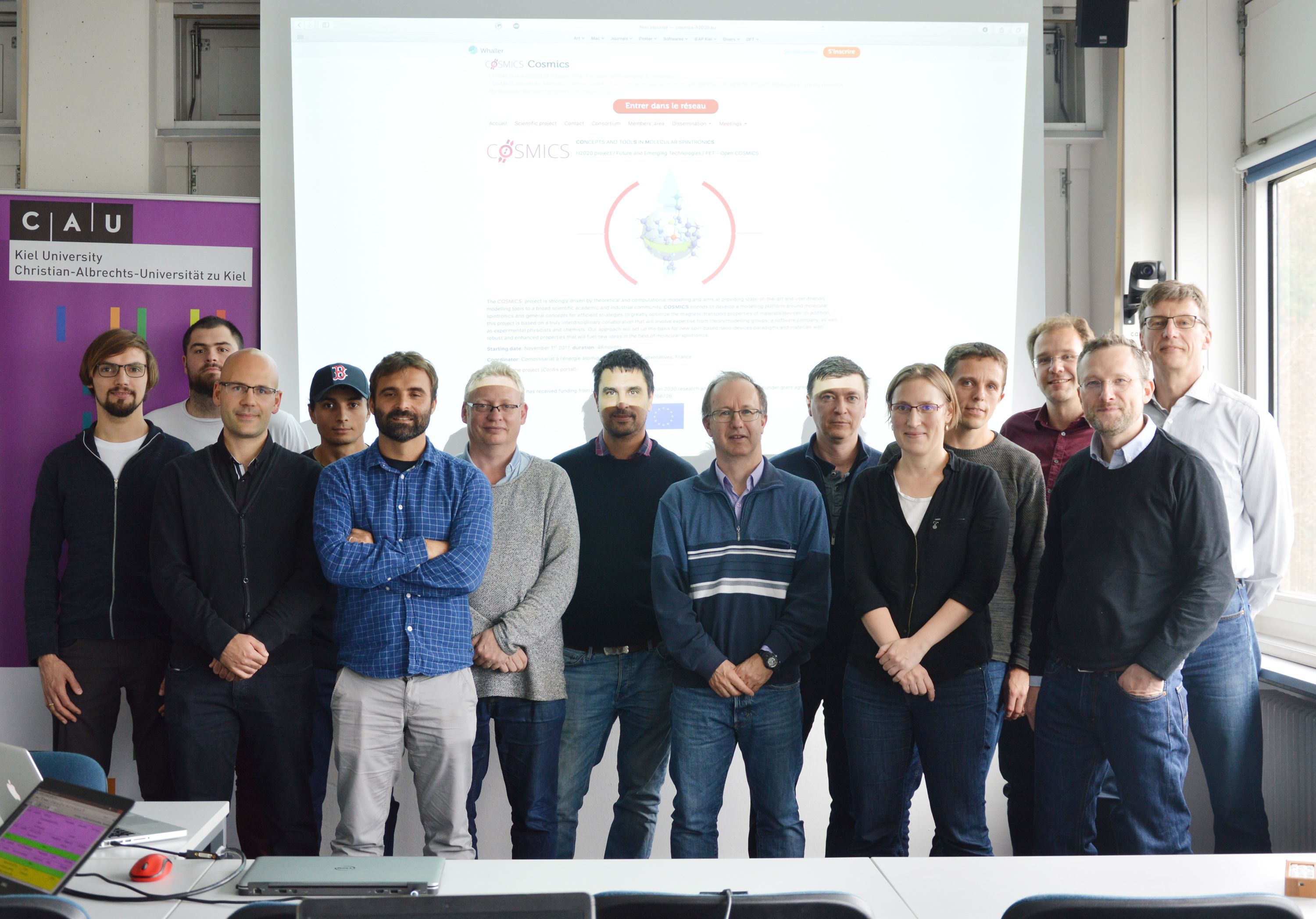 Visit of the Austrian Physical Society

On 17 April 2019, a group of approximately 20 physics teachers from the Austrian Physical Society visited the Berndt group. After some general remarks on the research methodology and topics of the group, Dr. Gruber guided the group to our labs, showed our low-temperature scanning tunneling microscopes, and presented our project COSMICS (EU FET Horizon2020). The group turned out to be interested in a wide variety of aspects of the work, form basic physics over the techniques used to funding issues. Apparently our little show was much appreciated: we were rewarded by delicious ''Mozart Kugeln'' from Innsbruck ;)

The SPEC/GMT team of CEA coordinates the European H2020 FET-Open project "Cosmics" (Concepts and Tools in Molecular Spintronics) whose kick off meeting was held on November 27th and 28th, 2017. This project, stemming from a very selective call, focuses on the search for new hybrid devices, associating molecules and metallic magnetic electrodes, able to enrich the design of highly miniaturized electronic components.